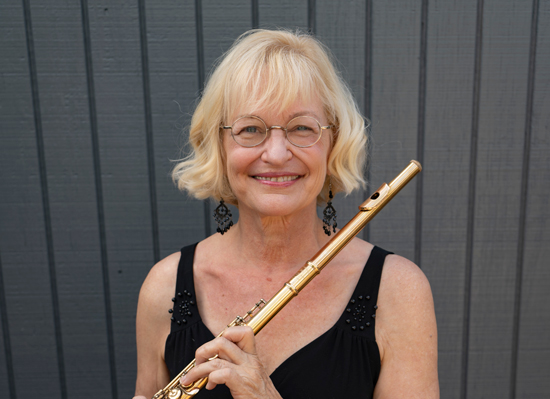 Flutist, Cheryl Strommen Loofbourrow has been a freelance Flutist with many orchestras including the LAPops, LA Jewish Symphony, Beverly Hills Symphony, West Coast Pops, and the Veracruz Symphony, where she lived in Mexico for 2 yrs. At 16, she won an audition to Solo with the Milwaukee Symphony, graduated from interlochen Arts Academy, and as a Music Performance major at USC, won their Wind Competition as a Sophmore. She has recorded solo Flute with World VisionTV, and the Glory of Easter. Favorite Events were: the Queen Mary Trio brunch for 2 years, a Reception fpr Bob Hope, the Nixon Library Opening with 4 presidents, and contracted orchestral musicians for several Sacred Choral Orchestras. Cheryl teaches Flute and Piano in her home studio and plays weddings with numerous Chamber Music groups. Recently, Seal Beach Chamber voted her for the award, Heart of the Chamber.

The Trio Festivo first started as “the Queen Mary Trio” for their brunch, lasting for 2 years. They did numerous events and weddings, as well as the Thanksgivings and Christmases at the Disney Land Hotel. The group shifted the instrumentation to replace Guitar with Cello. Greg Adamson of Fullerton became the 1st call Cellist and the 1st call Violinist is now, Elaine Tubines of Long Beach. Both Greg and Elaine are sought-after Musicians, who have done extensive orchestral work in LA and Orange County, and Orchestral travel out of the Country. The Trio Festivo will be performing their annual full Christmas Concert at St. Annes coming up on Mon Dec 13th from 7 to 8PM. It is Free to the Seal Beach community due to generous Donors.